I hadn’t planned on releasing any content related to the current protests, the BLM movement, or racism and race relations. It’s not my area of expertise (and nothing close to it), and I ponder the value of posting on social media that I suddenly care because it’s popular to care and it’s the “trending” topic. I’d much rather care about human rights year-round, but that’s just me – and to step down from my pompous throne, I can understand that moments like this can galvanise positive action on matters in a society that likes to only care about important things.. sometimes and there’s definitely some value there. All of that mess is beyond the scope of the article though.

In this article I want to examine the stats behind the following image, which I’ve specifically written over with the text with a weird orange highlight. Hopefully that way the image can’t be copied again without drawing the original conclusion into question. At the very least it confuses the message (unless you’re reading this article), which I consider useful given how fucking stupid the original is.1 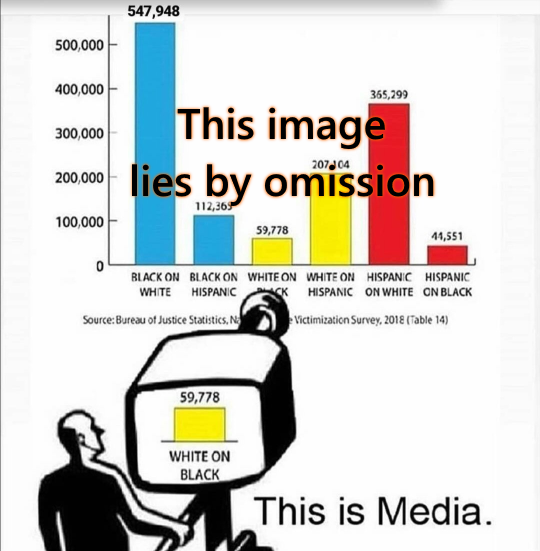 This was shared on Twitter (sans my weird-orange-highlight-text overlay) by some nobody who doesn’t deserve any more attention. This graph interested me, since it gives numbers but also a credible source for the numbers, which can make it appear like a compelling case at a glance. So I did what anybody should do (but almost nobody does) – I went and looked up the source.

Issue #1: Most of the U.S. population is white, and so most violent crime victims are white.

This is completely ignored in the original image. If you add white-on-white violence into the graph then every other category is dwarfed by comparison. Literally every race/ethnicity category here has the most violent incidents against whites in raw numbers.

Sorted by the victim’s race/ethnicity (the color shows the offender): 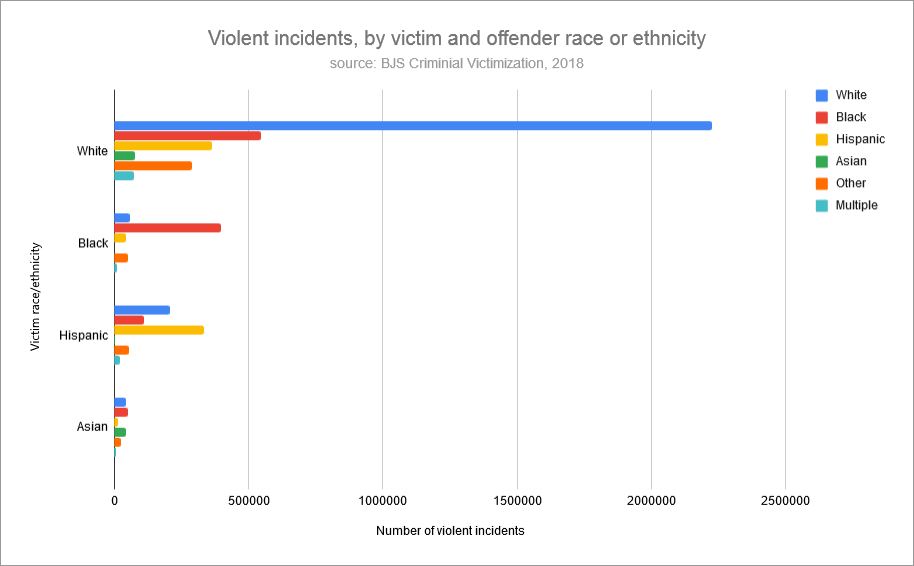 Alternatively you can sort it by the offender’s race/ethnicity (the color shows the victim):2 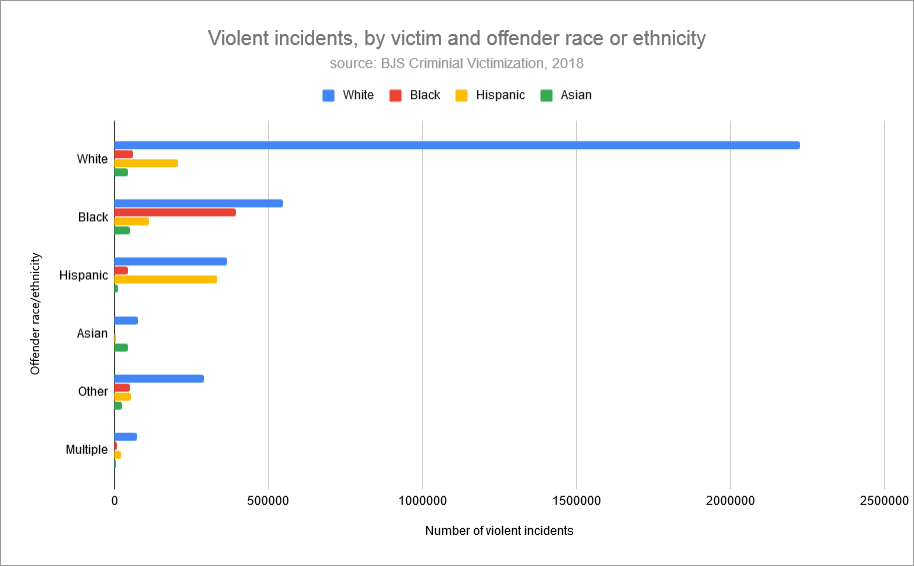 Guess what fuckers, the majority of violent crimes perpetrated in the US in 2018 were done by *gasp* whites. Amazing how population numbers work isn’t it.

This very clearly shows that Asians are non-violent, Hispanics and Blacks are a little violent, and Whites are violent as fuck, and are fucking awful people to every race/ethnicity including their own. The numbers don’t lie boys,3 we’ve just confirmed that all whites are violent thugs – bring it up at your next KKK meeting. They’ll love you for it.

(Yes, there are differences of violent crime per capita by race/ethnicity, but saying that skin color inherently causes violent crime, is like saying we should get Nicolas Cage to stop making movies for the sake of pool safety.)

Issue #2: The “white kills black” narrative in the image completely ignores that we’re talking about police being the perpetrators.

If this data is accurate, black deaths from police shootings have been very roughly a bit under half as much as white deaths to police shootings over the past 4 years. Now look back at the graph showing how many violent crime incidents black are offenders of compared to whites. It’s not an enormous difference between the two by these stats, but it’s not trivial either.

There’s certainly much more that could be said on this point but to keep things brief (and also make this less time intensive to write up), that’s all I’ll put forward for this article.

Presumably being treated like less of a person in a country where “all men are created equal” can be upsetting. Some might even be bold enough to say it’d be upsetting in other countries too. 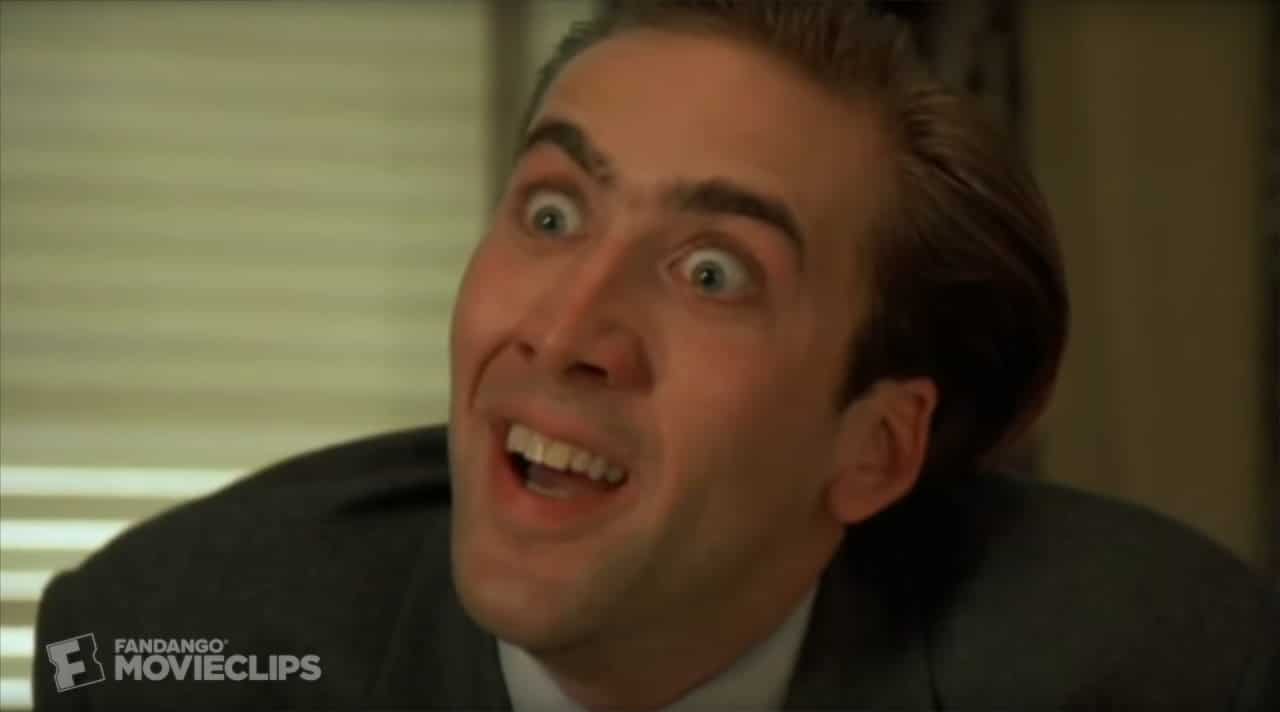 Until next time, this is one half-violent-thug, signing off.4

P.s. please don’t re-use the graphs without double-checking the numbers yourself from the linked source. I’ve had limited sleep for the past two nights and so am prone to making errors.

2 Replies to “2018 US violent crime statistics by race/ethnicity”