This is written for Wargame: AirLand Battle (ALB), and doesn’t factor in changes made in Wargame: Red Dragon.

The sentiment among some Wargame players seems to be that this class of units is useless, or at least pointless to actually use. The argument goes something like this:

While both of of these points are true, some experimentation has still found an excellent home for these jack-of-all-trade infantry squads in my decks.

It’s true: Light Infantry don’t have enough punch to take out heavy tanks (unless hitting from not-the-front) – they just don’t have enough AP power to reliably deal threatening damage to anything with double digits of frontal armor.1 However, they can completely wipe out any infantry transport in the game – armored or otherwise. They can also destroy most vehicles, support units, and low-end tanks with just one or two missiles.

Basically, if the target has a single digit of frontal armor, these guys can stop it in its tracks. That makes them excellent at holding off troop movement through an area that has building cover for them to use. They won’t last long against an all-out assault, but for anything less they’ll hold their own and buy you time to reinforce the area, flank the attackers, or simply push elsewhere.

Light Infantry vs Other Infantry

Yes, their anti-infantry capabilities are weaker than Special Forces or even the best non-SF infantry squads. But if you get Light Infantry into a key building first, they should be able to use that cover to require your opponent to significantly out-number or out-support your LI in order to push forward successfully in any reasonable time frame.

Unlike 2-strength ATGM Infantry, Light Infantry come with a squad strength of 10, allowing them to put up a real fight against opposing infantry when they’re being pushed.

Speed, I am Speed

Speaking of getting to a building first, I strongly recommend using helicopter transports for Light Infantry, or at least high-speed ground transportation if there’s a good road-path to relevant locations (which will vary map-to-map).

Factoring in partial road access for ground transports and the extra landing time of airborne transports, you can usually reach a destination about twice as quickly with the latter, particularly when the road doesn’t align with the most direct path to your destination (such as the road to the east of the highlighted building in the above image).

Personally I favor PACT’s THS Mi-8T due to its combination of low cost and moderate combat range, but those without access to it there are still some strong alternatives. For example, the Light Riflemen’s available UH-60A Blackhawk lacks in weapon range but makes up for it with incredible speed (300km/h) and an astounding 2758RPM armament that will shred (or at least quickly stun!) anything that can’t fire back.

Both NATO and PACT’s Light Infantry have access to a few transport vehicles with an off-road speed of 80+ km/h if you’re sticking to wheels and tracks instead. Just remember that on some maps you’ll get roads that lead you where you want, but on others you’ll need to select less forward positioning if you don’t want to risk being the second guy to the infantry house party. 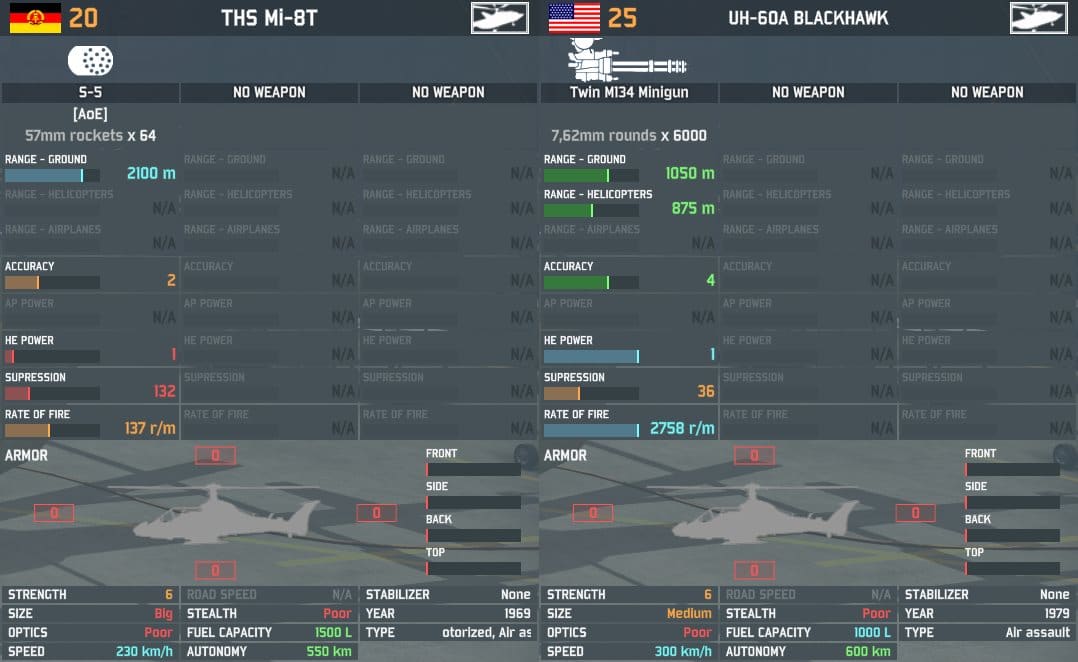 If you assign LI to defend a location where they can’t make use of their range advantage (such as being in the middle of an urban environment instead of at the edge), then you might as well just be using some kind of regular infantry instead. Forests and other types of cover can also obscure vision enough to heavily reduce the effective range of LI unless you add a spotter for them – aerial recon presents a straightforward solution for that at least.

If you set them up alongside other infantry units, then you might want to just use regular ATGMs instead, since you’ve just negated much of LI’s benefit over them by allowing regular infantry to cover one of the ATGM’s core weaknesses (poor anti-infantry). Sure, LI are more durable if that’s really what you’re after, but if you can completely out-range the target (as is often the case with ATGMs) then you don’t strictly need much durability.

One last thing: if you rush out LI to some buildings using high speed transport, you’ll find yourself in hot water if your opponent is rushing almost any 10+ strength infantry squad to the same location, and it’s worse still if they have some forward-facing anti-air choppers backed by some recon. Even if they’re just moving some ground troops through your landing destination, you will Not Have A Good Time if you’re getting there second. The further towards enemy spawns you get the higher the risk – aim for sensibly aggressive positioning, not just aggressive positioning.

Ideally you should send a recon chopper (or something else fast with Very Good / Exceptional optics) alongside your preferred method of transport to make sure your Light Infantry aren’t about to be mauled. Nobody likes being mauled.