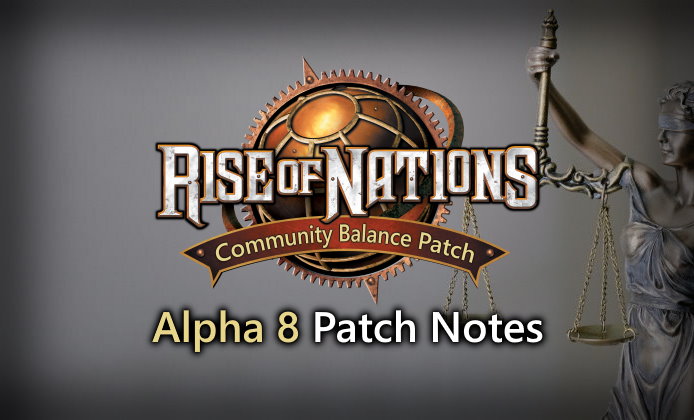 This is a small-medium sized patch, focused mostly on non-balance changes.

As a reminder, if you just want a summary of the important stuff you can check the patch notes in the launcher or on Steam.

The Music Tracks selection plugin bundled with CBP in Alpha 7c has been merged into a larger Sound.xml Editor plugin to reduce the risk of file-level conflicts. See the enhancements section for more details.

This means that three Citizens take slightly under 1 minute to build the first city, rather slightly over 1 minute. By keeping a somewhat elevated value over the standard build speed (100%), there should be virtually no changes to building in contested areas (slower building speeds make it easier to build in contested areas, as otherwise the place you want to build in might become enemy territory).

This is primarily to save everyone a bit of time in nomad games without really fundamentally changing the game. Secondarily, it also very slightly reduces the penalty for building without all three Citizens, such as when you get an unlucky spawn where one Citizen is far away from the other two.1

On any map with one or more contested bodies of water, players with access to Copper have an enormous advantage, and it’s arguably the single most impactful rare in many of these situations.

Reducing the bonus HP to 12% doesn’t prevent Copper from being a significant advantage, but does tone down its absurdity somewhat. Testing indicates that this change does not affect the number of Fire Ships required to destroy Copper-buffed Heavy Ships or Bombardment Ships under any normal gameplay conditions.

Colosseum continues to appear as one of the weakest wonders in skilled play, as each of its bonuses has less impact on gameplay in that skill bracket. However, there’s also been no reports of it being more heavily utilised post-buff in in lower skill brackets either.

I (MHLoppy) was personally the person in the Advisory Group that blocked this larger buff from being included in early versions of CBP out of fear that overbuffing the Colosseum could damage games in that low-skill bracket while still not having any real benefit in the higher skill bracket. That fear meant only a 5% buff from 20% to 25% was initially implemented.

Having continued to consider this change over the past year,2 I now believe that the additional cost reduction is unlikely to have the feared effect – and so am now willing to have the larger buff included. This change isn’t expected to matter in high-skill play, but may nudge up the viability of defensive or expansionist strategies in mid-skill without burdening low-skill with e.g. higher attrition damage.

Balancing this wonder without anyone feeling like they’ve been mugged is a challenge. High values for the extra pop cap tend to ruin nomad games (and even 1v1s in standard), but low values can feel jarring to compared to the original 50.

At 35 population, other players are able to get within 10 pop of the Colossus player by being up 1 Military tech level.3 A 10 pop gap is small enough to plausibly allow a better player with slightly fewer units to outplay their opponent by making use of superior micro / positioning etc – but to still suffer a clear loss if they don’t.4

Despite having identical HP, armor, damage, attack speed etc, Crossbowmen are better units in combat than Heavy Archers and indeed better than most or all of the Age III unique Foot Archers as well. This is down to their superior projectile speed and faster attack animations, allowing them to deal damage faster and more reliably than the other Age III/IV Foot Archers.

Slightly reducing the projectile speed gap minimally affects the overall balance of these units, but goes some way towards addressing the relative balance between Crossbowmen and the other FAs without significantly changing how the units feel to use and play against.

Notably the attack animations of each of the units has not been changed. Crossbowmen will continue to feel highly responsive and remain among the best units in the game for kiting.

These are intentionally conservative changes, but may be subject to change again in future if community sentiment begins to lean heavily in any particular direction.

With object masks working approximately as intended, Foot Archers end up double-dipping their damage modifiers and annihilating these units because Foot Archers have large bonus damage against both Horse Archers and Elephants, and the Mahout line is considered both. To be clear, this is what BHG — the original developers — put in the game.

Nonetheless, the effect of the stacked damage bonuses is significant enough that even Age V Musketeers and Fusiliers deal significantly less DPS against Mahouts (III) than Crossbowmen do.7

By sequentially reducing the bonus damage taken as the Mahouts upgrade, the common matchup in Age III is affected the least and continues to be a very strong counter-matchup, while the worst, probably-unintended edge case in Age V is toned down the most. To further reduce impact outside of the intended scope, the change only applies to Foot Archers from Age III and higher.

Foot Archers continue to be among the highest-damage option against elephants across II-V, and all of the Mahout units in III-V continue to beat all non-FA units in 1v1 matchups, even after this change.

As previously discussed, Democracy + The President are consistently weak in comparison to Monarchy + The Monarch, but it’s also difficult to buff the former without interfering with sea map balance (where Democracy is common due to less frequent land combat).

Having spent a year continuing to review government usage in IV, the benefits of buffs for land maps seem very likely to outweigh a slight balance hit for sea maps. Nudging up the discount may be enough to entice safe and/or defensive players to consider Democracy over Monarchy.

The options to buff The President are quite limited for technical reasons.9 This seems to be one of the few semi-useful, thematically-appropriate, doesn’t-break-sea-maps things to add, and so has been.

In isolation this is a token buff. It’s not expected to meaningfully change the balance between the two governments, but is an improvement over no change at all. Together with the small Democracy buff, hopefully this government/patriot combo can gain slightly more appeal.

Because this unit doesn’t upgrade in VII / VIII, it suffers both from having no stat improvements, and at the same time taking increased damage from units in higher ages due to inherent age-difference penalties.

Because its damage dealt isn’t changed, it still won’t scale in a direct combat role, but it should function slightly better in its intended utility role during the affected ages.

CBP Launcher has received a number of small improvements, including:

The CBP Launcher and CBP Setup icons have also been updated to be slightly distinct from one another (“CBPS” and “CBPL” instead of both having “CBP”), and are now slightly higher quality.

Additionally, the following plugins will be included alongside CBP Launcher and can be enabled / configured via the Plugins tab. As usual, these plugins are completely open source.

Although not great for game balance, adjusting these parameters remains very popular. Using a traditional dropdown mod to do so overrides many of CBP’s changes, so this plugin can be used instead (and supports configuration of the exact values you want!).

If using this plugin, all players in a multiplayer lobby will need to configure their plugin with exactly the same values in order to play together. Also remember that high unit counts can cause game instability, so increase the values at your own risk.

This plugin integrates the Music Tracks plugin released in Alpha 7c with a basic installer for the popular Rise of Babel taunt pack which many regular online players use. Note that this installer currently only supports English, and doesn’t include the copyrighted audio used by the taunts. The intention is to make it easier for users without the taunts to at least be able to understand the communication from taunt-using players.

This plugin also avoids and fixes a minor music bug which many/most RoB installs are affected by, where audio tracks from T&P are not used while RoB is installed (which was a key purpose of the Music Tracks plugin).

Update: the Music Tracks plugin has been removed.

Changes which affect multiplayer gameplay balance are marked with (!)

As a final note, it appears that exe-patching would unfortunately break replay compatibility,10 and although exe patching is possible to do (e.g. to rebalance Dutch standard vs nomad and fix hardcoded bugs), it’s inadvisable to do so on a regular basis in order to reduce the number of compatibility breaks.

If patching the exe is considered desirable, I recommend that a set list of changes be decided upon by the community over an extended period of time (at least many months), thoroughly tested, and then implemented all in one go. This would allow all future games to use the same patched exe, breaking replay compatibility once, rather than many times.