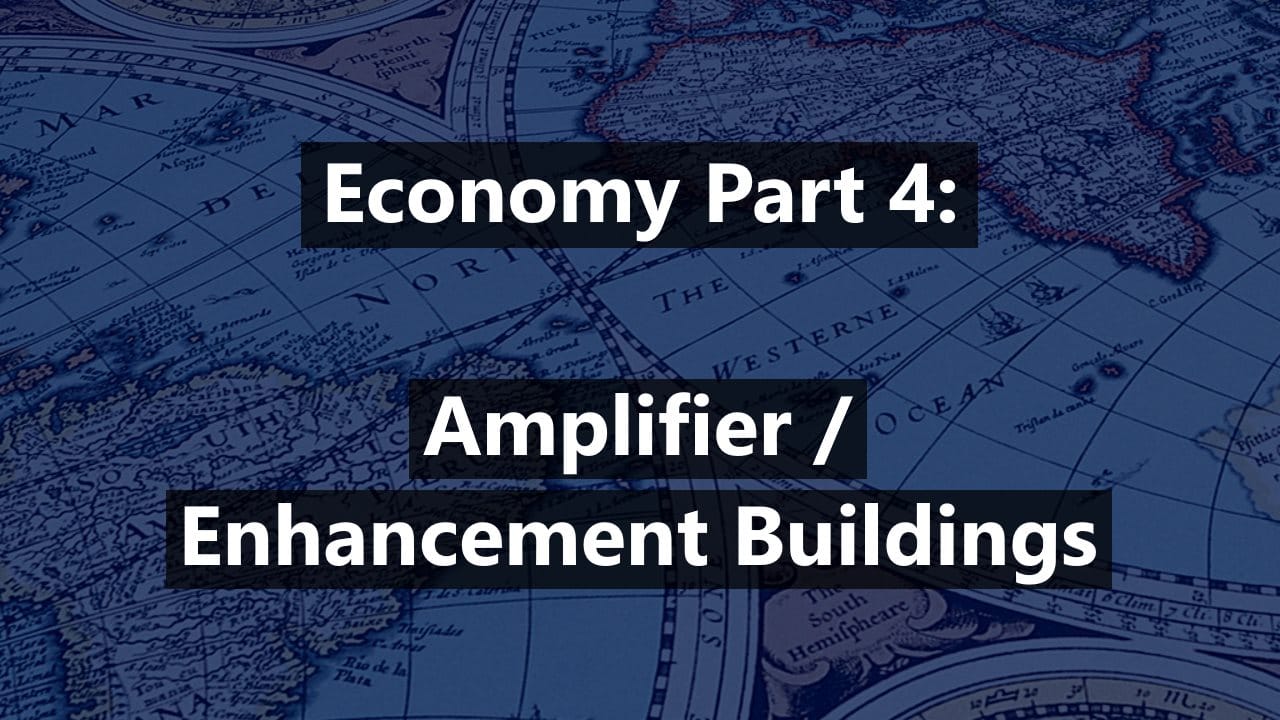 In the previous installation of the Economy series1 we covered Fish and Rare Resources. This time we’re circling back to an extension of basic resources – their enhancement or amplifier buildings.2

To varying degrees, all of the six basic resources have a building available which increases the effective gather rate of that particular resource.

Food, Timber, and Metal have the most straightforward enhancement buildings. The Granary, Lumber Mill, and Smelter respectively are all tied to the economic radius of the city which they’re built in. They will only amplify the output of Farms, Woodcutter’s Camps, and Mines (respectively) built within the same City’s economic radius (although Granaries can also apply  their effects to the Food gather rate of Fishermen if you have the corresponding research completed).

The increased gather rate applied by each of the three structures can be further boosted via research at the respective building, which will then apply to all buildings of that type. For example, if you research an upgrade at one Granary, it will then permanently increase the effect of all Granaries (both present and future).

^ The effect on Fishermen is global, but doesn’t apply until you do research at the Granary.
* Which requires research – a Temple without research will not generate any income beyond its completion bonus.
** Universities are both the basic structure and the enhancement structure for themselves, so when you build one, you automatically gain the effect at that University of whatever amplifying research you’ve previously completed.
*** Each University provides a flat +10 Knowledge – this part doesn’t get increased with research, only Scholar-based Knowledge does.

Most of the enhancement buildings have research increasing their “amplification rate” i.e. increasing their effect on the gather rate of their respective resource. Most of these structures also have a second tree of research which will affect a vaguely thematically-related thing (such as construction speed and building HP research at the Lumber Mill).

With no research upgrades, a Granary increases Food output from Farms by 20%, which would be the same increase as putting a hypothetical sixth farm in the city if it already has five. With fully-completed research this increase maxes out at 200%, literally 10 times the increase.

In order to construct a Granary, you need Classical Age (II) and Science 2. It has a base cost of 60 Timber and 40 Wealth, with a Timber-only ramping cost of 40.

There are two research trees available at Granaries, and they require certain levels of library tech to be available for research.

Although Cities produce 10 Food, Granaries do not have any effect on this number – with or without Granary research completed.

With no research upgrades, a Lumber Mill increases the Timber produced by Woodcutter’s Camps by 20%. With fully-completed research this increase maxes out at 200% – this mirrors the Granary on both counts.

In order to construct a Lumber Mill, you need Classical Age (II) and Science 2. It has a base cost of 60 Food and 40 Metal to construct, with a Metal-only ramping cost of 40.

There are two research trees available at Lumber Mills, and they require certain levels of library tech to be available for research.

As with Granaries, Lumber Mills don’t have any impact on the Timber produced by the City itself.

Interestingly, Architecture (the Lumber Mill’s second B-Tech) is cheaper than Medicine (the second Granary’s B-Tech) – despite the fact their the respective first and third B-Techs are the same price.

Unlike Granaries and Lumber Mills, a Smelter with no research upgrades increases Metal produced by Mines by 50% – which the former structures can only attain with additional first-level research. With fully-completed research the Smelter’s maximum boost is 200%, just like the Granary and Lumber Mill.

In order to construct a Smelter, you need Classical Age (II) and Science 3 (one Science level higher than a Granary or Lumber Mill). It costs 70 Timber and 50 Wealth to construct, with a Timber-only ramping cost of 40.

Like its Food and Timber based cousins, the Smelter has two research trees available, and they require certain levels of library tech to be available for research.

I hope you’re ready for one of the messiest tables you’ve ever seen.


As mentioned pre-tables, although a Smelter starts out with a 50% amplification effect, it still only ends at 200% with all research completed. This means the final A-Tech upgrade for the Smelter seems — relatively speaking — poor value compared to final A-Tech of the Granary and Lumber Mill. There’s probably minimal gameplay implications from this discrepancy, but it’s interesting to note nonetheless.

In another seemingly arbitrary deviation, the third level B-Tech upgrade is also comparatively cheap. This means that it’s cheaper to get three anti-attrition upgrades than it is to get three attrition upgrades. However, since there’s a fourth attrition level at the equivalent tech level (Modern Age), it’s not a particularly useful piece of trivia either.

An interesting discovery for me was confirming from an unverified source5 the undocumented effect that the Smelter B-Tech has on the craft of Totalitarian (red) Patriots. With a couple of upgrades, you can use your single Patriot to simultaneously provide Ambush, Forced March, and Decoys to an army – pretty crazy.

Firstly, the Refinery applies globally to all oil production. If you build a Refinery on one side of the map, it will increase the Oil gather rate of an Oil Well — or Titanium Merchant — on the other side of the map.

The increase is a flat 33% per Refinery, stacking additively (for example, three Refineries will increase production by 99%). You still have to build it within a City’s economic radius, and there’s still the usual one-per-City limit.

The library tech needed to construct a Refinery is Industrial Age (VI) and Science 6.6 It has a base cost of 100 Timber and 50 Metal, with a ramping cost of 15 Timber and 15 Metal. This is coincidentally the same base cost and ramping cost of Oil Wells (but not Oil Platforms, the sea-based variant which costs slightly more to build).

There are no technologies available for research at the Refinery, so you’ll have to resort to just building more of them if you want to increase the amplifying effect.

The wheels are gone, so I guess we’re using a sled now. Better pray that it works.7

By default (with no research), a Temple will slightly increase the national borders, hit points, and attack range of the City that it’s built next to. Like all structures in this list, you can only build one within each City’s economic radius and a Temple will only provide its local benefits to one City even if within the economic radius of more than one City.

To build a Temple you need to have researched Science 1 (which is an amusing juxtaposition). You’ll also need 80 Timber to get your first one built, and there’s ramping cost of 30 Timber for each Temple after that (the same base and ramping costs as a Market). Upon completion, the Temple provides a completion bonus of 30 Wealth (also like a Market).

The Temple does at least follow the previously established pattern of having two lines of technology to research, with the first improving its default effect and the second being a different, unrelated effect.

* This effect stacks multiplicatively (not additively) with the Lumber Mill’s B-Tech which increases the HP of all structures. I.e. a 2500 HP Large City can get +100% (Monotheism from Temple) and +20% (Architecture from Lumber Mill) and end up at 6000 HP (2500 * 2 * 1.2) instead of 5500 HP (2500 * 2.2).
** Taxation rate provides wealth equal to the rate times the percentage of the map which is your territory. E.g. 50% taxation when you control 24% of the territory of the map would provide +12 Wealth income. This only works for your own territory (not allied) and does not scale with player count or map size, meaning large maps with lots of players will actually stunt everyone’s Taxation income.

If a Temple is destroyed, its effects on a City will be lost. This means that once the second level of Religion is researched, it’s usually faster to first destroy the Temple and then focus on the City afterwards rather than attack the City directly from the onset. Consequently, it’s usually best to place your Temple on the “safe” side of a City where it will be difficult for your opponent to destroy if your City is sieged. This also applies to other structures which you especially want to keep alive (such as military buildings and Wonders).

Armed with the power of smart, the Magician-Scholars take your sled and turn it into a hoverboard – who needs to touch the ground anyway?

Universities are super weird, because they are both the basic structure for their resource (Knowledge), but also the enhancement structure for it (and therefore themselves).

Per usual a University must be built inside a City’s economic radius, and you can only build one per City.

Building a University requires Classical Age (II). It costs 60 Timber and 30 Wealth, with an additional ramping cost of 20 Timber and 20 Wealth. You get 25 Knowledge as a completion bonus.

Each University starts off with no Scholars inside, but generates a flat +10 Knowledge income independent of the number of Scholars occupied inside (including no Scholars). Each Scholar (costing 30 Wealth with a ramping cost of 2 Wealth) produces +5 Knowledge. Because Scholars start off quite inefficient compared to actual Universities themselves, during the early game it’s usually better to build multiple empty Universities instead of training Scholars.

The single line of University research has no name, so I’m going to take the liberty of dubbing it Academia. It increases the amount of Knowledge produced by Scholars while they’re garrisoned in a University.9

Note that the Academia upgrades do not affect the base +10 Knowledge generation of a University – only its Scholars. This means that the maximum output of a single University is as follows:

This does a good job of demonstrating how the first Academia upgrade is somehow both powerful and weak at the same time. Despite the fact that it’s a 40% (!) increase in Scholar-only Knowledge output, having 5 buffed Scholars would still produce the same amount of Knowledge as having 5 unbuffed Scholars and an additional empty University.

I’m glad this article was eventually completed without resorting to literally just copy pasting the wiki pages or simply linking to them. I started writing it in late 2018 and really struggled to find a way of presenting all the information that didn’t feel to me like a waste of the reader’s time.

Anyway, this is all of the (what I consider) mostly boring stuff out of the way. In Part 5 — which should be the final part in this particular series — I’ll delve into detailed comparisons of basic production buildings vs their enhancement buildings. When is it better to build a Farm vs a Granary? What about with Mines and Smelters? And so on.

After the Economy series is done, I’ll be finishing it up with a postscript of sorts – an article talking about the balance between economy and military within Rise of Nations. That as-of-yet unwritten article is actually why I started the Economy series in the first place, so that all the necessary economic concepts would be covered (and can be linked to as needed) before moving onto talking about the balancing act of using them. Hope to catch you in the next articles. 👋