Checking these out seemed like a natural extension of reviewing my video/audio settings, so I figured I’d do a quick write-up on what I learnt. 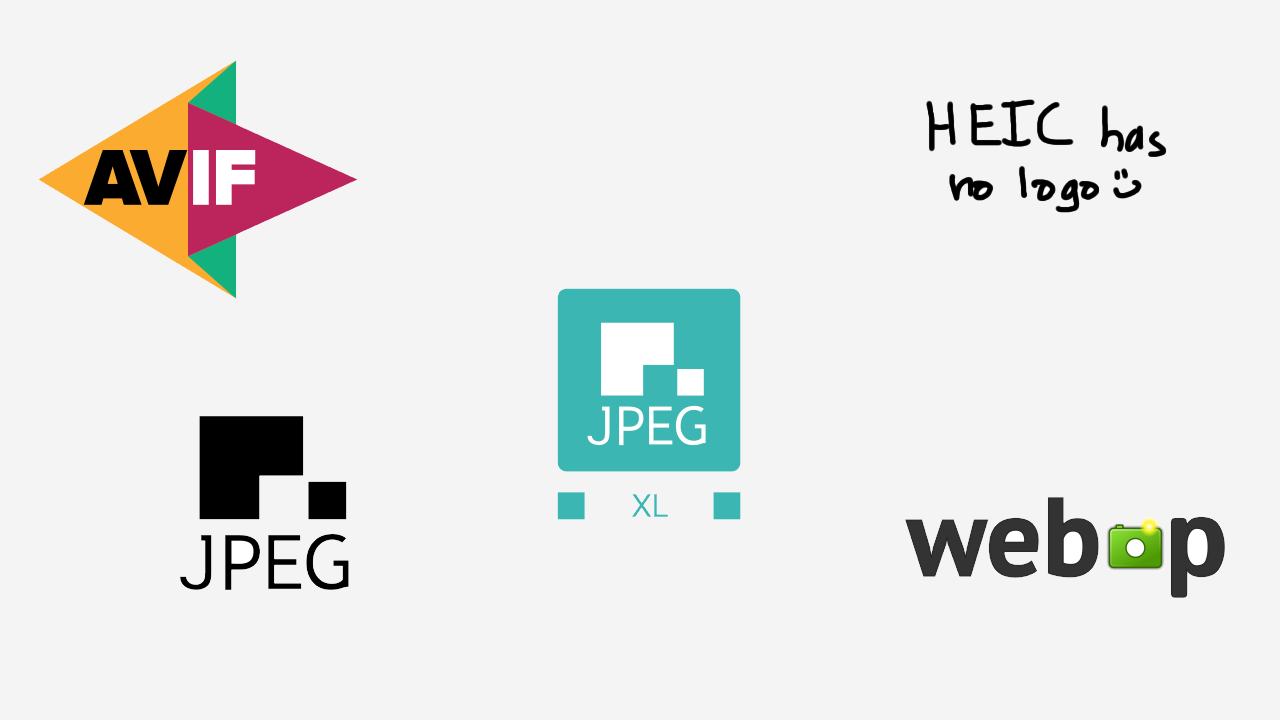 The JPEG image format was first released in 1992, and for some reason we’re still using it despite its exceedingly mediocre compression efficiency by modern standards. JPEG 2000 was an attempt to replace it 20 years ago but didn’t succeed (and to be fair, I’m not even sure it was truly an upgrade if its Wikipedia page accurately portrays its performance compared to JPEG).1

There have been other attempts as well, but thus far none have widely succeeded.

Well, armed with a full 20 years of technological progress since JPEG XL, we’re taking another stab at it, and these seem to be the top contenders:

Beyond just having efficient compression, a good format for images should compare favorably in other areas too – there’s more to a good format than just quality.

After reviewing the performance and specifications of the next-gen contenders, JPEG XL looks like the clear winner to me, and based on the information I’ve looked at I really hope it gains widespread adoption in the coming years.2

The backwards compatibility of JPEG XL is also incredibly cool. Normally if you re-encode between lossy compression formats,4 you end up losing data for each compression pass, resulting in a lower quality result than if you just compressed directly a single time from the original source file.

JPEG XL can take an existing JPEG file, compress it into a new JPEG XL file and lose no additional information yet still produce a smaller file. The reverse is also possible; you can shuffle back and forth indefinitely between the two formats with no loss of data. Extremely useful for compatibility concerns!

There are also couple of notable areas where JPEG XL is weaker than its competitors, but I don’t think they’re deal-breakers:

It’s also worth underlining that there doesn’t need to be “one true file format”. We could totally have JPEG XL displace JPEG for most images and then make use of other formats where they make sense, such as getting animated AVIFs to try to displace animted GIFs for example. Some people get super cult-y about the format they personally like, and want it to be the universally used and worshiped format. I just want a merit-based format, and am perfectly content with a landscape that uses multiple formats as appropriate; we already do that right now with PNG + JPEG + GIF + WEBP combined probably covering over 99% of all compressed images.

(As we’ve gone further and further away from the core of the articles (NAS + PC upgrade), there’s been less and less detail. This final section of Phase 1 was where I researched just enough for me to make decisions for me, so you might not reach the same conclusions if you did your own in-depth research.)

There is some support for the next-gen image formats, but things are still a ways off from the universal support you’ll get with a JPEG file. As such, you end up (probably) needing to get new software to view next-gen formats. After not-that-much research and testing, I’ve landed on using the following:

For common formats (JPEG, PNG, etc): Windows Photo Viewer, which is present-but-disabled by default in Windows 10; it can be enabled via a registry edit. I still prefer this over the default Photos app, and also prefer it over the below options for quick, simple viewing. I imagine I’ll need to replace this choice at some point in the future given that it’s not really supported anymore.

For “exotic” formats (AVIF, JPEG XL, etc): nomacs, a free and open source image viewer which I had never heard of until a couple of months ago. The reason I don’t use it for common formats is partly because I’m lukewarm on the UI (I prefer a more minimalist view for general viewing), and partly because I’m lukewarm on its icon format. I know that the latter could be changed, it’s just a level of hassle I’ve decided not to deal with right now. The last stable release was a couple of years ago, but it looks like there’s still a bit of activity on dev builds.

For GIFs specifically: also nomacs. I also considered (and briefly used) GIF Viewer, but it has a weird quirk/bug where it doesn’t always show a GIF at its native resolution by default. That makes it a bad general-use viewer, but I still find it useful for specific purposes due to its ability to pause, seek, and override frame rate of GIFs as well as seamlessly resize during playback. Honestly the default Photos app on Windows is probably fine for general-purpose GIF viewing as well, I just feel slightly gross using MS Store apps in general.